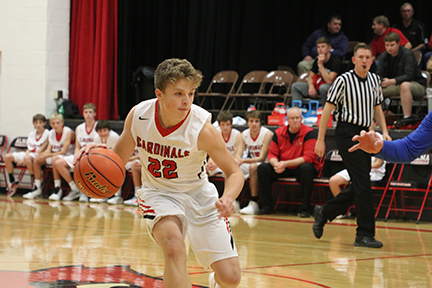 The Alma Cardinals Boys Basketball Team played the Kennesaw Blue Devils on December 10th. Starting the season off right, Tanner Heckenlively scored four 3-pointers bringing in a total of 12 points in the first quarter. Burke Boehler bringing the heat made a 3-pointer and a 2 pointer. Ending the quarter both Vince Ontangco and Issac McCurdy scored 2 points each. With our boys starting strong, we score 21 points in the first quarter while only allowing those Blue Devils to score 7 points. Ending the quarter with a final score of 21-7.
In the second quarter. Burke stayed with the game scoring another 5 points for his team. Antonio Hudson scored 2 points as well. Grant McQuay joins to offense and scores 2 points to add to the scoreboard. The Cardinals scored 9 points in the second quarter. Our defense held Kennesaw allowing them to only also score 9 points. The final score of the second quarter, 30-16.
Refreshed from the half time break, our boys came out with a hoop and holler. Boehler came out scoring tow 3-pointers and a 2-pointer. Nathan Hock ready to win the game scored another 2 points for his team, Issac McCurdy more ready than ever scored a 3-pointer and a 2-pointers. The Cardinals scored 15 points in the third quarter. Our defense also refreshed held the Blue Devils, allowing them only to score 6 points. Our boys ended the third quarter with a final score of 45-22.
Ready to win the game, our boys gave it everything they had. Burke Boehler, Nathan Hock, Issac McCurdy, and Jason Stenka all score 2-points. Vince Ontangco made two 2-pointers scoring 4 total points. Cardinals scored a total of 12 points finishing up the game. Our defense stayed strong and the Kennesaw Blue Devils only scored 11 points. The final score of the game ended with 57-33.