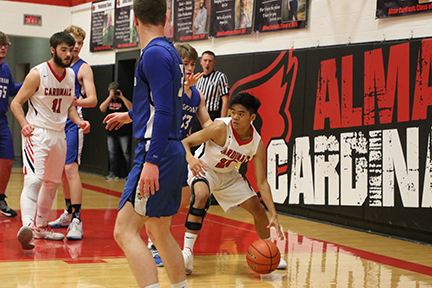 The Alma Boys Basketball came back aggressive from the Christmas break winning the game against Medicine Valley on January 6th of 2020.

In the first quarter the Cardinals started heating the floor scoring 20 points in total, Isaac McCurdy with 8 points, Jason Stenka with 5 points, Tanner Heckenlively with 3 points, Nathan Hock and Vince Ongtangco both had 2 points for the first quarter. The score at the end of the first quarter was 20-12 in favor of Cardinals.

Cardinals showed some pride coming back from half time. Isaac McCurdy with 8 points, Nathan Hock with 4 points, Antonio Hudson with 3 points and Burke Boehler with 1 point giving the Cardinals in a total of 16 points for the third quarter. The score at the end of the third quarter was 44-29 in favor of Cardinals.

In the final quarter, the Cardinals stayed consistent scoring the basketball. Nathan Hock with 5 points, Tanner Heckenlively with 4 points, and Burke Beohler with 2 points. The score at the end of the fourth quarter was 55-40 in favor of Cardinals.

The Alma Boys Basketball won their 8th game, standing 8-2 for the season.