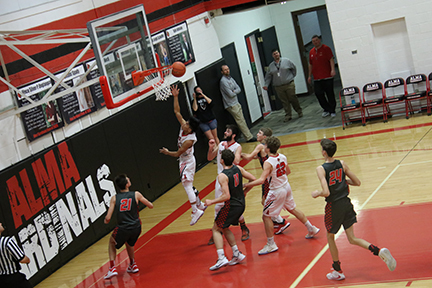 Alma struggled to shutdown the high-powered offense of Amherst. The lone scorers of Alma were Vince Ongtangco with two points and Burke Boehler with two points as-well. The score at the end of the first was 4-23.

Changes on the defense help keep the Broncos to eight points. Burke scored two points and Isaac McCurdy missed 2 free throws. The score at the end of the second quarter was 6-31.

Burke scored the most points with seven points and Isaac had the most free-throws with one.