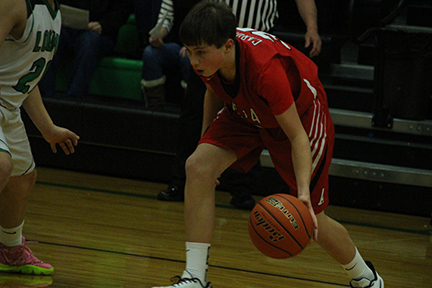 The Alma Cardinals Boys Basketball team traveled to Loomis February 24th to take on the Loomis Wolves. Kicking off the night, Nathan Hock scored 2 field-goals for a total of 4 points. Tanner Heckenlively also scored a field-goal, scoring 2 points. Isaac McCurdy successfully made both free-throw shots along with a field goal, adding 4 points to the board. Our defense held the Wolves at 9 points during the first quarter, making the final score of this quarter 10-9.

Setting out to defeat those Loomis Wolves, Vince Ontangco scored 2 field-goals, scoring 4 points for his team. Isaac McCurdy coming back, shots 2 successful free-throws and a field-goal, totaling 4 more points on the scoreboard. Nathan Hock makes a field-goal for 2 points. Ending the second quarter, Tanner Heckenlively makes 1 free-throw shot. Our defense feel short, allowing the Wolves to score 16 points during the quarter. The second quarter ended with a score of 21- 25.

Refreshed from halftime and ready to play, Isaac McCurdy was hotter than ever, scoring two 3-pointers and a field goal, adding 8 points on the board for the Cardinals. The Wolves were mighty and scored 16 points during the third quarter, ending with a score of 27-31.

With one quarter remaining, the Cards fought with every ounce of strength left. Burke Boehler makes an appearance and scores a field-goal and makes both free-throw baskets, scoring 4 additional points for his team. Vince Ontangco refusing to lose, makes 2 field-goals to add 4 points to the board for the Cardinals. The Wolves managed to sweep past our defense and scored 33 points. The final score of the game ended with 35 points for the Cardinals and 64 points for the Loomis Wolves.

Offensive highlight includes Isaac McCurdy for scoring a total of 16 points throughout the game!