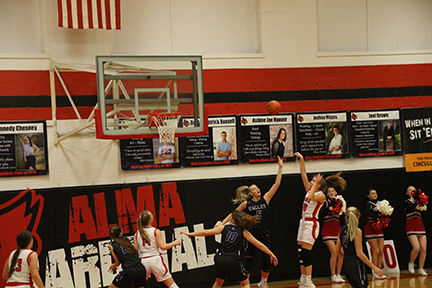 The lady Cardinals played the Southern Valley Eagles Monday January 27th. Katy Prickett scored 2 field goals along with Abby Cervera with 1 field goal. The first quarter ended with 6 points on the board for the Lady Cards

After half time Prickett scored a field goal as well as Cervera going 2/2 at the line and Fox going 1/2 on the line. They ended the quarter scoring 5 points win the 3rd

Stuhmer scored a 3 pointer and a field goal Neal also scored a field goal along with Cervera doing the same. Prickett went 2/2 twice at the line. The girls scored a total of 10 points in the 4th

The Cardinals ended the game 36-44 with the Eagles taking home the victory. Prickett had 16 rebounds Cervera had 7 and Stuhmer followed up with 5