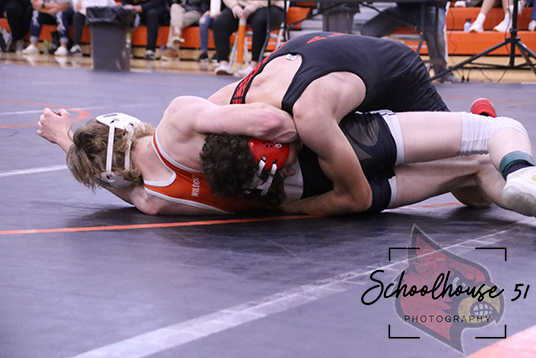 The wrestling team started off their season strong, with a first place finish in Maxwell on December 2, 2021. This year’s team consists of 12 wrestlers, three of which are seniors returning for their final season.

For the first dual of the season, the Cardinals pulled out a win over Wauneta-Palisade with a score of 60-6.

For the second dual, the Cardinals face up against Maxwell. During this dual, one of our seniors, Ayden Molzahn gets his 100th career win. This dual was a close one, but the Cardinals ended up on top with a score of 37-33.

The third dual of the night was against Medicine Valley. The Cardinals pulled out another strong victory with a score of 60-6 once again.

For the fourth and final duel of the night, the Cardinals were matched with Dundy County-Statton. They were once again victorious, ending in a final score of 54-12.

After this first night of wrestling, six of our wrestlers ended the day with an undefeated record. This consists of junior Carter Brandyberry, freshman Tucker Brandyberry, sophomore Gavin Dunse, freshman Jeremy Felix, freshman Evan Millard, and senior Ayden Mohlzahn. Leading the team in takedowns that night was Ayden with six. Leading the team in pins was Ayden and Jeremy. Overall, it was a great night for the boys with many wins and a final finish of first place.