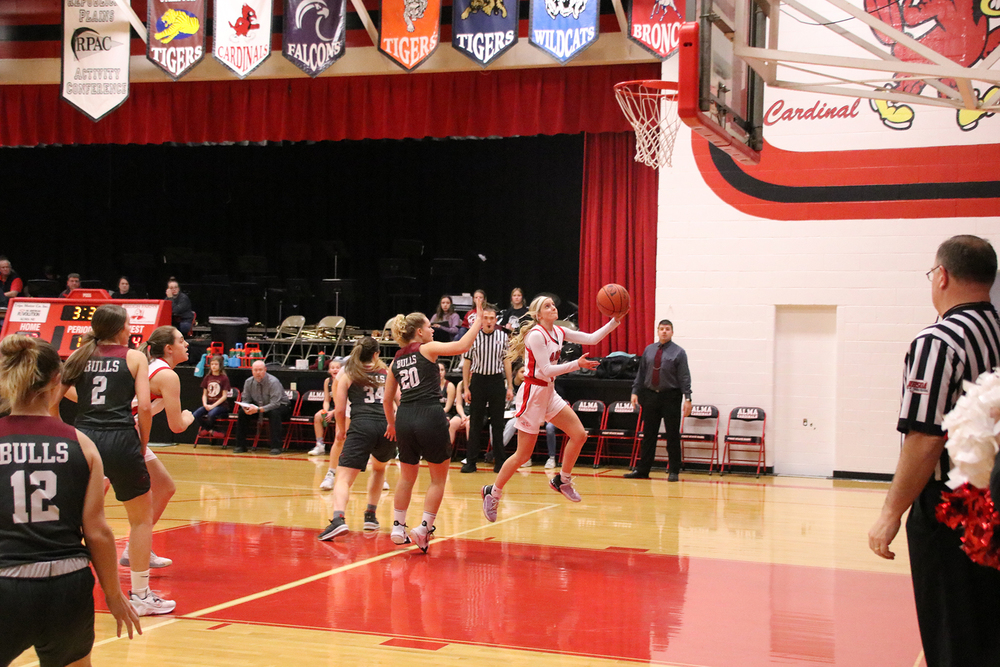 The Lady Cardinals played an amazing game against Hi-Line on Thursday, January 13th. The girls started off the first quarter with a strong lead, with Carlee Stuhmer making both of her free throws, Addison Neal scoring two 2-pointers, Addison Siebels scoring four 2-pointers, and Riley Scott scoring 2 points. This left the starting score at 18-4 in favor of the Cardinals.

The girls expanded their lead with Carlee scoring a 2 pointer, Addison Neal following up with a 3 pointer, Siebels making three 2-pointers for an overall 6 points, and Riley making a 3 pointer, a field goal, and 1 of her 2 free throws. Madison Wolfe rounded out the scoring with a two-pointer, leaving the score at 37-15 for the first half.

The Cardinals came back from half-time and kept their defense hard and their baskets falling, with Stuhmer, Hammond, and Siebels all scoring 2 pointers, for 6 points overall. Madison Wolfe followed up making 6 points on her own, with the third-quarter score left at 49-18.

Alma finished the final quarter of the game strong, with Stuhmer scoring 5 points, Neal scoring 4, Addison Pool, Madison Wolfe, and Kaylee Baker all scoring 2 pointers for an overall 6 points, and Chayse Molzahn scoring one of her 2 free throws. This left the overall score of the night at 65-18 for a successful win.