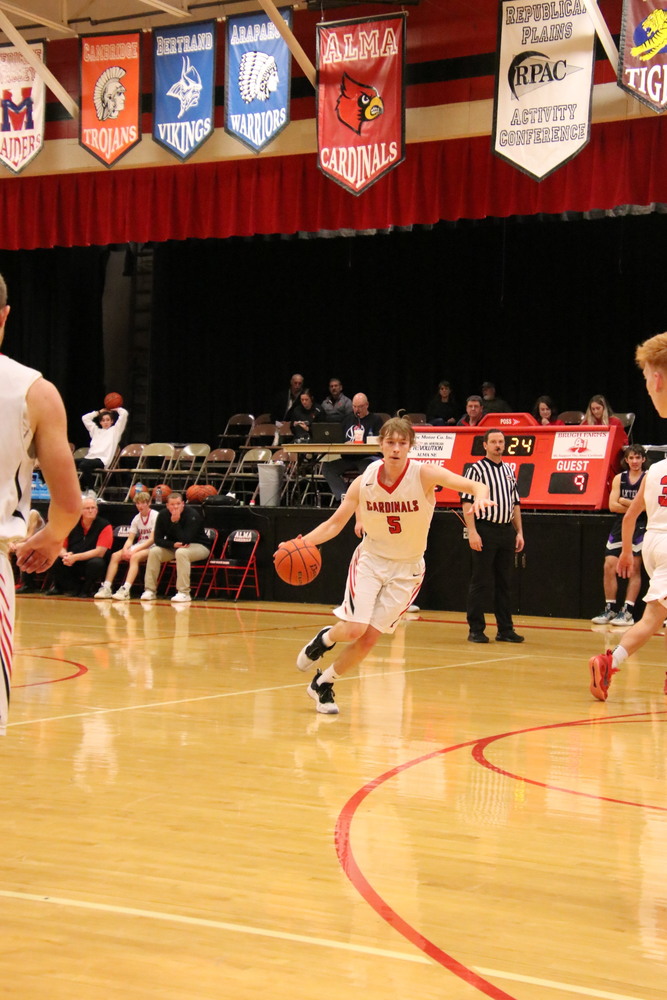 The Alma boys basketball team played a difficult game against the Axtell Wildcats on January 8, 2022. The first quarter resulted in one 2-point shot by Peyton Herrick.  The Wildcats tough defense made it difficult for the Alma boys to get their offense running.  The score at the end of 1 was 12-2.

The second quarter was more of the same with the tough defense of the Wildcats.  Ryan Kermmoade was able to get on the board being 2-2 from the free-throw line.  Axtell had balanced scoring from their team and put the score at half time 29-4.

In the third quarter, the Cardinals' offense found their rhythm with Jakin Neal making a 3-point shot. We added Ryan Kermmoade making one 2-point shot and Grant McQuay making both free throws from the charity stripe.   The score at the end of the third quarter was 11-38

In the last quarter, Ryan Kermmoade made one three-point shot.  Inside the arc was Jakin Neal and JT Clapp both making one 2-point shot. Ryan Brugh also made one shot out of the 2 shots from his free throws. Peyton Herrick also contributed with 2 free throw shots. In his first, he made one out of the 2, and in the second he also made one of the 2. The boys weren't able to catch up to the Axtell Wildcats leaving the final score 54 to 20.